Schedule a meeting with our digital marketing strategist for a Free Consultation.

What We Know About The 2020 Google December Core Update 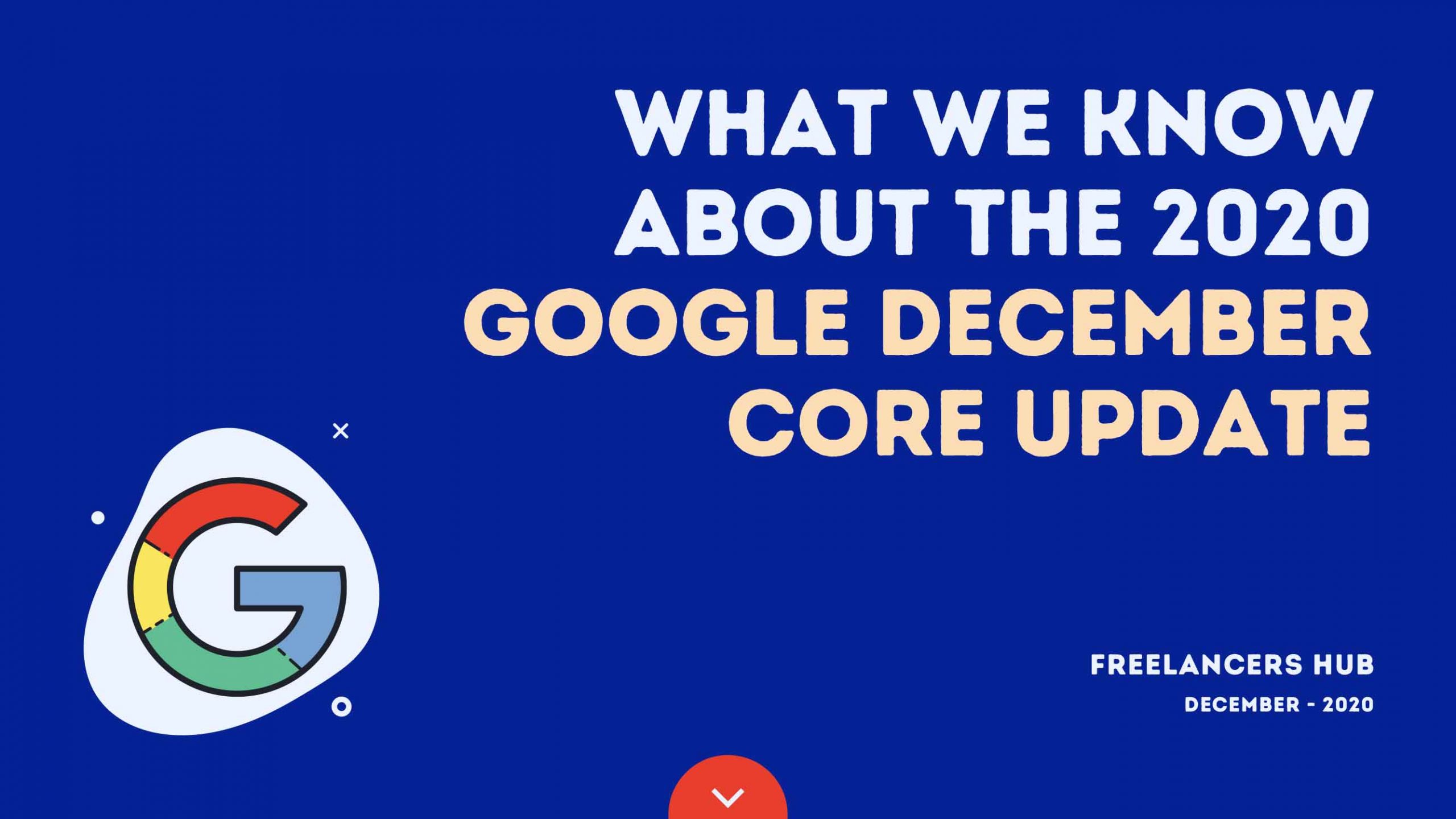 Google’s algorithm updates are often the cause of dread for businesses and marketers worldwide, and on Dec 3, they announced one of the most significant updates of 2020. With recent data, you could see the impact of the new update immediately, but Google did say that the full scope of the update will take a couple of weeks to roll out fully.

Early numbers show that the December core update is a more significant update than the May 2020 update. Like all the other core Google updates, they rolled it out globally at around 1:00 pm ET on Thursday, Dec 3. It was like all the other “broad core update.”

However, unlike the usual schedule where Google would send one out every few months, this took around seven months, which is the longest we have been without an update. The December update is the most significant update within the four updates, even bigger than the September 2019 update.

We have data from several search data companies who say that even though the update was huge, the ranking fluctuations weren’t that much, with the biggest one coming on Dec 4.

Even though Google waited till the end of the thanksgiving season, it can still be devastating for businesses whose sales numbers usually go through the roof right before Christmas.

If you want to know more about what you can do for your website, then you can check out Google’s Webmaster updates. Now that you know about the December 2020 core update, let us tell you what the leading search data companies are saying about it.

Data Providers On The December 2020 Core Update For SEO

Search data providers are the pillars of the online marketing ecosystem. If you want SEO website optimization services, then you will need the data they provide.

Looking For SEO Growth?
Talk To An Expert Now!

Get a Quote Free Consultation

These companies take a look at Google algorithm updates and show you how significant the impact will be for your website’s Google ranking. So knowing what they say about the recent December 2020 core update will help you get ahead of your competition when it comes to SEO optimization, so let’s check out what they say:

RankRanger is one of the biggest data providers for the online business community. According to them, even though the May core update was one, the biggest in recent memory and the December one is bigger still. People from RankRanger said that they had seen many changes, especially in the top three results.

When they compared the impact data from May with the December core Google algorithm update, they saw the fluctuations more than doubled in December. The new update impacted every niche, and the changes are more significant in the top three to five rankings except for the top five results in the travel niche.

Another search data provider is SEMRush, who released some critical information about the December Google algorithm update. Yulia Ibragimova, Olga Andrienko, and the SEMRush team said that they felt the impact of the update immediately on Dec 4.

The SEMRush Sensor tool measured a high 9.4 on the December update, which seems bad, but the score stabilizes with the businesses understanding how to do SEO optimization better. Here is what it looks like on Dec 14:

SEMRush also shared the websites that benefited the most from the update. They are zoominfo.com, whitepages.com, linkedin.com, ebay.com, vimeo.com, loginbrain.com, yahoo.com, foursquare.com, and businesswire.com.

The sites that were losers in the update were yellowpages.com, newsbreak.com, gettyimages.com, wish.com, echovita.com, urbandictionary.com, local.com, dnb.com, and aliexpress.com. If you are unsure about what’s wrong with your website, then contact Freelancer’s Hub SEO specialists, and they will provide you with the answers you are looking for.

Searchmetrics has become one of the major players in the search data provider sector. One of their spokespeople said the announcement that Google will roll out the update throughout the following weeks.

However, they did say that the impact of the core Google algorithm update was immediate, and it was felt on E-A-T and content – music, health, finance, news, and e-commerce sectors. With the new update, many of the websites that suffered in the May update did recover this time around.

However, it was widely thought that Spotify and Twitch would recover with the December 2020 core algorithm update, but that still doesn’t seem like the case with ten days gone. With the update being slowly rolled out this month, the odds are the full impact will be visible at the turn of the new year, and these sites should bounce back.

The Searchmetrics team conducted a thorough analysis with all their data for you to check out! Here are the early winners and losers for the December 2020 core update according to Searchmetrics:

Johannes Beus, the CEO of Sistrix, published their analysis labeled “Google’s Christmas Present.” In the article, they published their finding on the recent Google core algorithm update. They state that the first changes were on Friday afternoon, central Europe time, which showed up on their sensors the following day.

According to them, the shifts in Google search rankings were warranted because they were eluded to the updated guidelines. You can find a boiled down take on our friends’ new content guidelines at Search Engine Journal. Sistrix, too published its list of winners and losers for the December 2020 core update. Here is their list:

The Aftermath Of The New Core Update

So there you have all the information about the core December 2020 Google algorithm update. We provided you with all the information the thought leaders on google core updates released. There are differences in their data because each data provider tracks different metrics, sites, and keyword sets.

The entire community has been buzzing with varying discussions, saying that they have lost 40% of their traffic with a new update, while some say they gained over 150% traffic increases from Google.

So if you want to know what to do in the aftermath of a core Google algorithm update, you can check out their newly published core update guidelines. Remember, the odds of being impacted by the new update are high, so do not panic if you suffer some traffic loss or lose a few ranks.

You can quickly get back on track with some tweaks to your SEO optimization strategy. You can also check out what the community is saying about the 2020 December core update to understand better what is happening to your website.

So if you are having a hard time understanding how you can get back to the top, then feel free to get in touch with our SEO specialists.

And with that being said, we are done now. Feel free to drop in your queries in the comments below or hit us up on our socials. We will get back to you with the answers you need. So that’s it, for now, we will come back with something new for you soon. Until then, see ya!

Obtaining further information by make a contact with us

With more than 6 years of experience, our team offers comprehensive creative digital solutions for everyone.

© 2022 FH IT Solutions LLC. All Rights Reserved by Freelancers Hub